Avery Cormier’s autism diagnosis was still pretty new when she arrived at a summer camp for children on the spectrum. She had felt different from the other students at her middle school back home. But at camp, she felt something else: an instant connection.

“I could literally walk up to someone, and we already had five things in common,” says Avery, who is 13. She felt accepted, appreciated, and popular there. “I had an army of children following me wherever I went at camp.”

It was there that she found “her tribe, people who understand her, people who are just like her,” explains her mother, Joanna Brown.

An excellent student and artist, Avery wants to advocate for teens with autism. She recently signed up with a New York modeling agency, where she made it clear that her mission is to celebrate autism. “Autism is an amazing part of who she is,” says her mother.

Along with her mother and younger brother, she joined the SPARK study in 2020 to advance knowledge about autism.

Avery’s autism diagnosis, at age 11, came seven years later than the average age of diagnosis for SPARK participants. She had been evaluated for developmental differences at age 6, but the diagnosis then was attention deficit hyperactivity disorder, her mother says. As Avery got older, her social struggles became more noticeable. Some of her friends began spending less time with her. Although a good athlete, Avery struggled with the social aspects of playing on a team.

Curious about the Genetics of Autism

Avery’s mother was looking online for autism information when she saw a Facebook post about SPARK. Her interest was piqued when she learned that SPARK was collecting DNA samples in its quest to discover new autism-related genes.

“Besides having a curiosity about whether autism is genetic, I also am a huge genealogy buff,” says Brown, who has three children. “I’ve submitted my entire family’s DNA for genealogical research purposes. I just fervently believe that getting data from kids, and families who have a family member diagnosed with autism, is a unique and extremely relevant way of establishing better research.”

Brown also hopes that research will lead to better programs and services that will help people with autism be as independent as possible in adulthood. 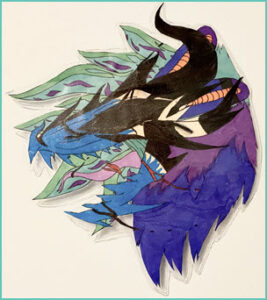 Creative and imaginative, Avery immerses herself in her favorite subject at school: art. She draws frequently. She also sculpts with clay, which, she reminds her mother, is in short supply at home. She recently created a dragon out of a clay pinch pot, which is made by molding the contours by hand. “No one knows where I get my artistic abilities from,” Avery says.

She enjoys cosplay, which involves dressing up in the costume of a character from anime, science fiction, or a game. Avery has created an original character, CrystalX, an “alternate universe goddess or the AU goddess,” she explains. She draws so well that others have asked her to sketch their own original characters for them.

If she had the right materials, hint hint, Mom, she would make a CrystalX costume, says Avery, who is in eighth grade. “I would honestly wear it everywhere, if I could, but society is just so judgy.”

Another favorite activity is jujutsu, a type of martial arts.

Recently, Avery began to pursue her interest in modeling. She and her mother sent a photo of Avery to a modeling agency. “They really liked the fact that she is autistic and wanted to use that as part of her own platform,” Brown says. Some companies are looking for models who represent diverse communities, including autism, she says. “If she gets hired for a job, they will know she has autism. She doesn’t have to pretend to be someone she’s not.”

Middle school is a notoriously difficult time, socially, for many children, even those who do not have a social communication condition such as autism. But Avery maintains a positive outlook. Her motto is, “I like making friends with the world.”

“She’s the most loyal friend a person could ask for, despite being different from her peers. She does not talk about other people behind their backs. I’ve never heard her say a mean thing about anybody,” her mother says. “Except her younger brother,” she adds with a laugh. He can be a pest, says Avery, who is certainly not the first big sister with that complaint.

Avery would like people to understand one thing about people on the spectrum: “We’re all human. We shouldn’t be treated any differently than people who don’t have it.”

We care about your data, and we'd like to use cookies to give you a smooth browsing experience. Please agree and read more about our privacy policy.AGREE